Let's Learn English in this Way: an English Debate in Yuquan Campus 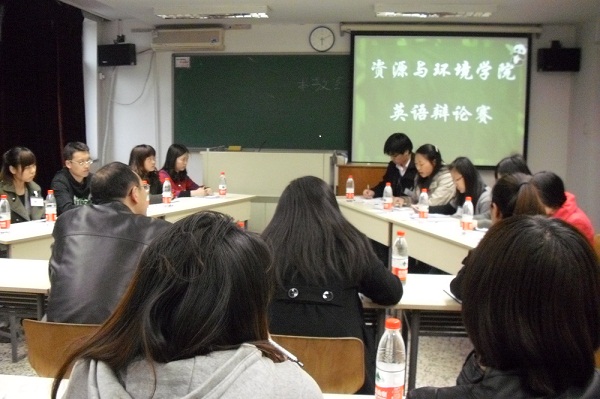 BEIJING -- On March 28th, at 6:00 pm, an English Debate Competition organized by College of Resource and Environment (CRE) of GUCAS opened its veil at the Teaching Building of Yuquan campus. Professor LIU Bin and Professor MENG Yanhong of Department of Foreign languages were invited as the honored guests and judges, Miss WANG Cuicui and members of the Students’ Union of CRE also took part in the competition.SUN Fengyun, Chairwoman of Students’ Union, presided over the competition.

The debate consisted of two sections, and each was divided into three stages: argument, free debate and closing. Free debate is the hottest part among all of the three from the beginning to the end. Debater’s quick thinking, fluent expression and sagacious view had got the unanimous approval and favorable comment from the judges. At the end of the competition, two judges gave profound and subtle comments and pointed out the problems.

The competition not only improved the students’ capabilities of logical thinking and oral expression, but also created a good atmosphere for foreign language learning. Meanwhile, the competition promoted understanding and friendship as well as common development in oral English.